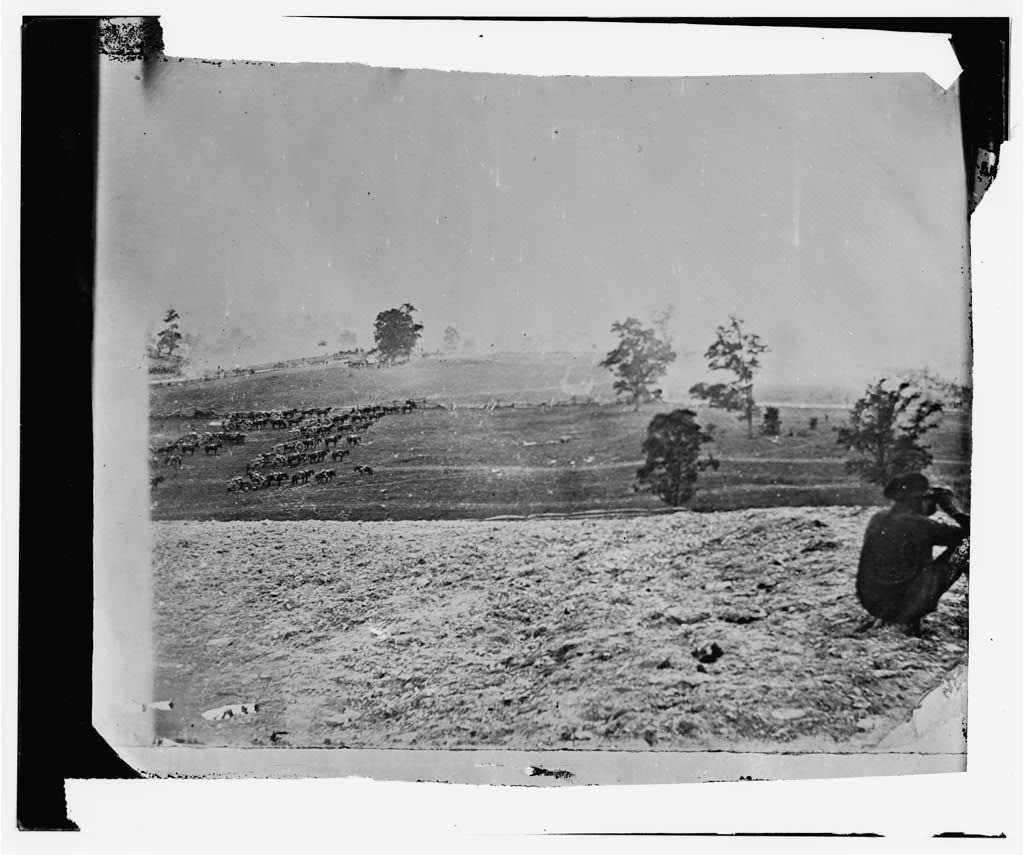 Antietam, Maryland. Battlefield on the day of battle [sic]

Image of Antietam map from Library of Congress

The Battle of Antietam pitted Union General George McClellan's Army of the Potomac against General Robert E. Lee and his Army of Northern Virginia.  The Maryland Campaign was Lee's first attempt to take the war North and it was McClellan who was tasked by President Abraham Lincoln with stopping him.  Outnumbered, Lee was able to use the rolling terrain and the experience of his men to make up for the numerical disadvantage he faced at Sharpsburg.

Over the course of the first three hours of the fight, the two sides struggled over possession of a twenty four acre cornfield. The Union I Corps, commanded by Maj. Gen. Joseph Hooker, and later the XII Corps, commanded by Maj. Gen. Joseph Mansfield, ran head long into Confederate troops led by Gen. Thomas "Stonewall" Jackson. No fewer than six times did the Cornfield change hands as each side attacked, fell back and rallied, only to attack again. By 8:45 a.m., neither side held a distinct advantage.

At approximately 9:00 a.m, a lull provided both sides an opportunity to catch their breaths, but within a few short minutes, a third major Federal assault was unfolding. Over 5,000 troops of the II Corps, commanded by Maj. Gen. Edwin Sumner, marched towards the West Woods in an attempt to eventually sweep south, driving the Confederates from the field. Shortly after moving into the woods, a Confederate attack struck the flank of the Union soldiers and in twenty minutes, 2,200 out of 5,300 men had fallen killed or wounded.

Following the struggle in the West Woods, by 10:00 a.m., the heavy action on the north end of the field subsided. Close to 10,000 soldiers had been killed or wounded during those first four hours of fighting.

Due to confusion on the side of the Union and the fact there were no infantry men to push into the battle at this point, the attack sputtered out. By 1:00 p.m., the Federal forces had fallen back through the sunken road, known also as the Bloody Lane, and returned to the fields where their attacks originated from. 5500 more Union and Confederates had been killed or wounded during these three hours of combat in and around the Bloody Lane.

While the fight for the Sunken Road was unfolding, a little over one mile to the south, the Union IX Corps, commanded by Maj. Gen. Ambrose Burnside, was struggling to cross the Antietam Creek. Burnside and his men were tasked with crossing the Antietam and then attacking the right flank of the Confederate line. 500 men from Georgia and a few from South Carolina put up a strong defense and kept Burnside at bay for close to three hours. Around 1:00 p.m., Union forces finally carried the bridge, as the Confederates fell back towards the high ground, just south of Sharpsburg.

At approximately 3:30 p.m., Burnside started his attack on the south end of Lee's line. 8000 men started the assault, 4000 men made it to a half way point, and only 2000 troops pushed up to the end of the Confederate line because of mounting causalities and the difficult terrain.

Just as the Federals reached the end of Lee's line, Confederate infantry, led by Gen. A.P. Hill, arrived on the field. These troops had been involved in the capture of Harpers Ferry, on September 15, and had marched approximately fifteen miles on the day of the battle to arrive on the flank of the Union line. They smashed into the Federals, causing the line to fall back toward Antietam Creek.

After twelve hours of combat, the roar of battle started to fade away. 23,000 men had been killed, wounded, or listed as missing, the single bloodiest day in the history of the United States. R.E. Lee's first invasion of the North ended as he retreated back into Virginia on the night of September 18. Most importantly, Union victory at Antietam provided President Abraham Lincoln the opportunity he had wanted to announce the Emancipation Proclamation, making the Battle of Antietam one of the key turning points of the American Civil War. 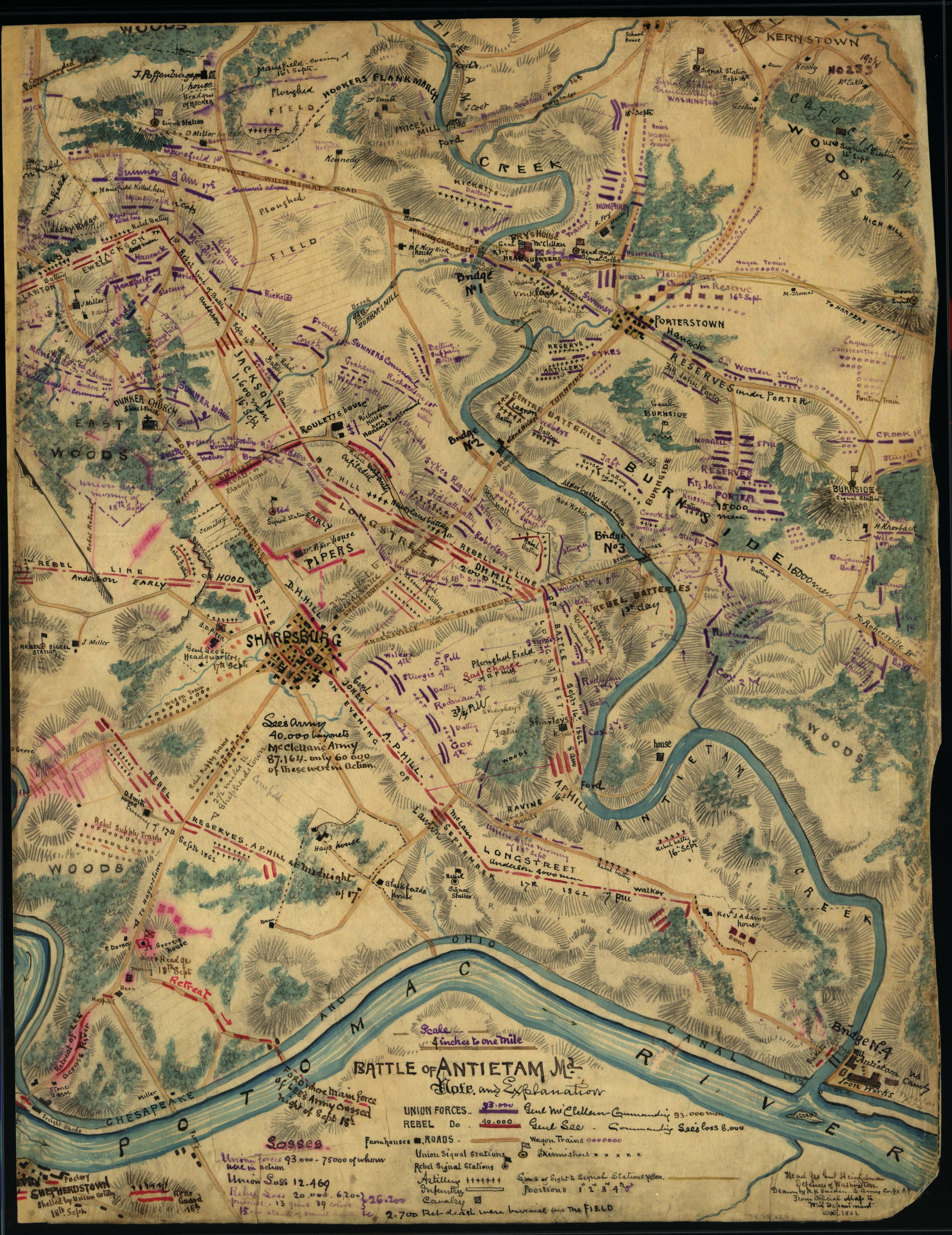 Image of Antietam map from Library of Congress

In this extremely detailed map, Sneden indicates the locations of roads, bridges, the Chesapeake and Ohio Canal, houses, barns, ploughed fields, and the Antietam Iron Works. The Union and Confederate signal stations are also noted. The line of battle is located east of the town of Sharpsburg on September 16; encompassing the town on September 17 (after the actual battle); and to the west of town on September 18th as Lee's Confederate troops retreated back across the Potomac toward Sheperdstown, W. Va.